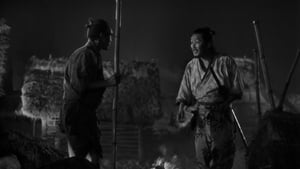 The archetypal action film, Seven Samurai is also one of the richest works to ever be committed to celluloid. Each of its characters is extraordinarily realized; each has his or her own arc, his or her own vital part to play in the film's slow progression towards its dramatic finale. Typically, Kurosawa has put the film together using an exceeding degree of artistry; each and every shot, each action sequence, is exquisitely composed; and yet none seems contrived or out-of-place within the overall fabric of the work. Everything is beautifully conceived and in focus, both literally and figuratively.
When watching Seven Samurai, movie lovers will immediately recognize that several of its key elements can be readily detected in countless similar films made during the last half-century. The audition scenes, in which several samurai are recruited for the difficult task of defending a farming town from a group of bandits, strikes a particularly familiar chord, as do those showing the samurai training the lowly villagers to fight and use weapons. Indeed, the theme of a highly experienced group of 'tough guys' taking up the cause of the disenfranchised has become something of an action film cliche, portions of which echo throughout the American western, as well as its progeny (think The Dirty Dozen, The Road Warrior or even television's The A Team).
But what really stands out in Seven Samurai are its characters. They run the gamut, from elder teacher to hopeful youth, stoic warrior to undisciplined brigand. Kurosawa even finds room for a youthful romance, not to mention the mix of poor and beleaguered townspeople he depicts within the setting of the town. Perhaps its no wonder the enemy bandits are virtually faceless-- there is so much conflict and passion present within the group of protagonists, the villains need not be more than a vague threat.
Through it all Kurosawa never forgets who these people are and where they stand in comparison to one another. Obviously, the samurai are, for the most part, samurai, while the townspeople are merely peasants, lacking even in funds to pay their noble defenders. Kurosawa deftly illustrates these class differences by having one peasant fear horribly for the honor of his daughter, who he suspects will be lured by the wealth of the samurai; and also by giving us one samurai who is no samurai at all, but merely a peasant himself whose own farming village was in his youth destroyed by marauding warriors. The film thus wraps a a portrait of class conflict in a cloak of solidarity. The samurai unite to defend the poor peasants, but the ending is not exactly happy for them. Nor are the peasants completely honorable. We learn, for instance, that they have in the past murdered defeated samurai and looted their bodies, and it becomes apparent late in the film that their claims of poverty are perhaps not as truthful as at first seemed apparent.
So why do the samurai defend them so valiantly? For honor? For love of adventure? The answer to this question is left intentionally vague; it is up to each viewer to draw his or her own conclusions. It is to the film's credit that it forces such questions upon us while never allowing them to cause the motivations of its characters to seem untrue.
Modern viewers will find the action sequences of Seven Samurai to be restrained. There are, for instance, no 'Gladiator' or 'Braveheart' moments in which limbs are visibly hacked off, blood flies and speakers pound with booming audio. But the action is wonderfully filmed and there is some early use of slow motion to accentuate key moments. The 3 1/2 hour running time may also deter some, but I find the length to be one of the film's charms; it takes its dear sweet time in exposing its riches, and no single moment feels underdeveloped or awkward. Don't miss it.
10/10